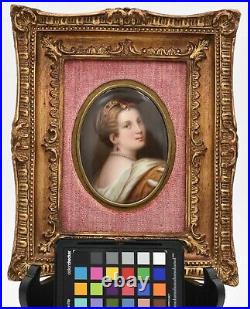 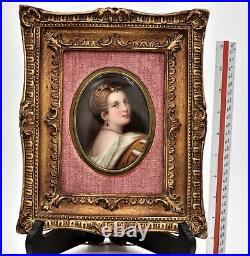 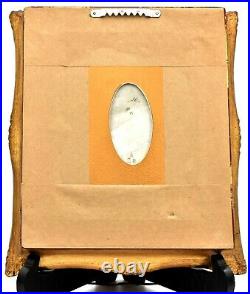 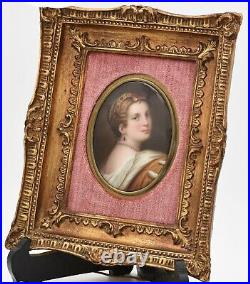 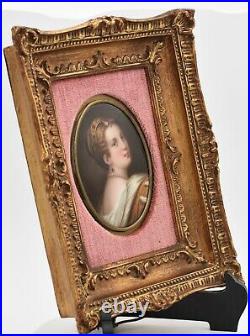 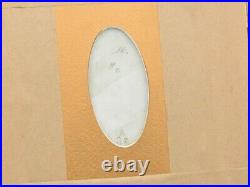 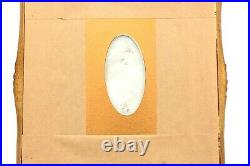 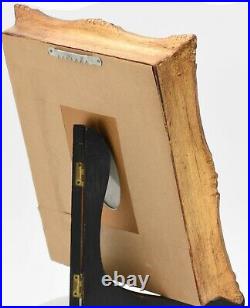 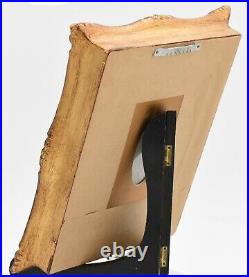 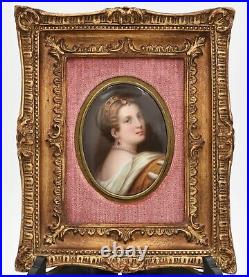 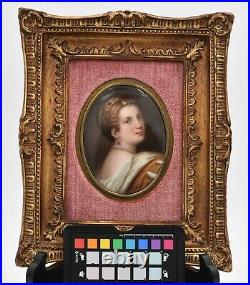 This antique portrait of Lucretia Borgia, painted in colored enamels on porcelain, has her head turned and looking over her right shoulder. She is wearing a gold tiara with ruby jewels, ruby earrings, and a pearl necklace. The reverse is impressed letters and numerals. Most of these type of plaques were manufactured by KPM (Berlin) and the Royal Vienna factory. The ornate gold leaf French frame is 10.625" by 8.75" by 1.5.

The oval porcelain dimensions are 4.75" by 3.625". This lady is historically famous as described in many books, films, and TV shows, reporting facts and fictions about her life. According to Wikipedia, the following excerpts were discussed. Lucrezia Borgia was born on 18 April 1480 at Subiaco, near Rome. [2] Her mother was Vannozza dei Cattanei, one of the mistresses of Lucrezia's father, Cardinal Rodrigo de Borgia later Pope Alexander.

She was a thoroughly accomplished princess, fluent in Spanish, Catalan, Italian, and French, which prepared her for advantageous marriage to any European monarch or prince, and literate in both Latin and Greek. She would also become proficient in the lute, poetry, and oration. The biggest testament to her intelligence is her capability in administration, as later on in life she took care of Vatican City correspondence and governance of Ferrara. The Borgias became prominent in ecclesiastical and political affairs in the 15th and 16th centuries, producing two popes: Alfons de Borja, who ruled as Pope Callixtus III during 14551458, and Rodrigo Lanzol Borgia, as Pope Alexander VI, during 14921503.

Especially during the reign of Alexander VI, they were suspected of many crimes, including adultery, incest, simony, theft, bribery, and murder (especially murder by arsenic poisoning). They were also patrons of the arts who contributed to the development of Renaissance art.

The Borgia family stands out in history as being infamously steeped in sin and immorality, yet there is evidence to suggest that this one-dimensional characterization is a result of undeserved contemporary critiques. The item "KPM framed painted porcelain plaque of Lucretia Borgia" is in sale since Monday, March 29, 2021. This item is in the category "Antiques\Decorative Arts\Picture Frames". The seller is "antiques4u_2" and is located in Wesley Chapel, Florida.

This item can be shipped worldwide.